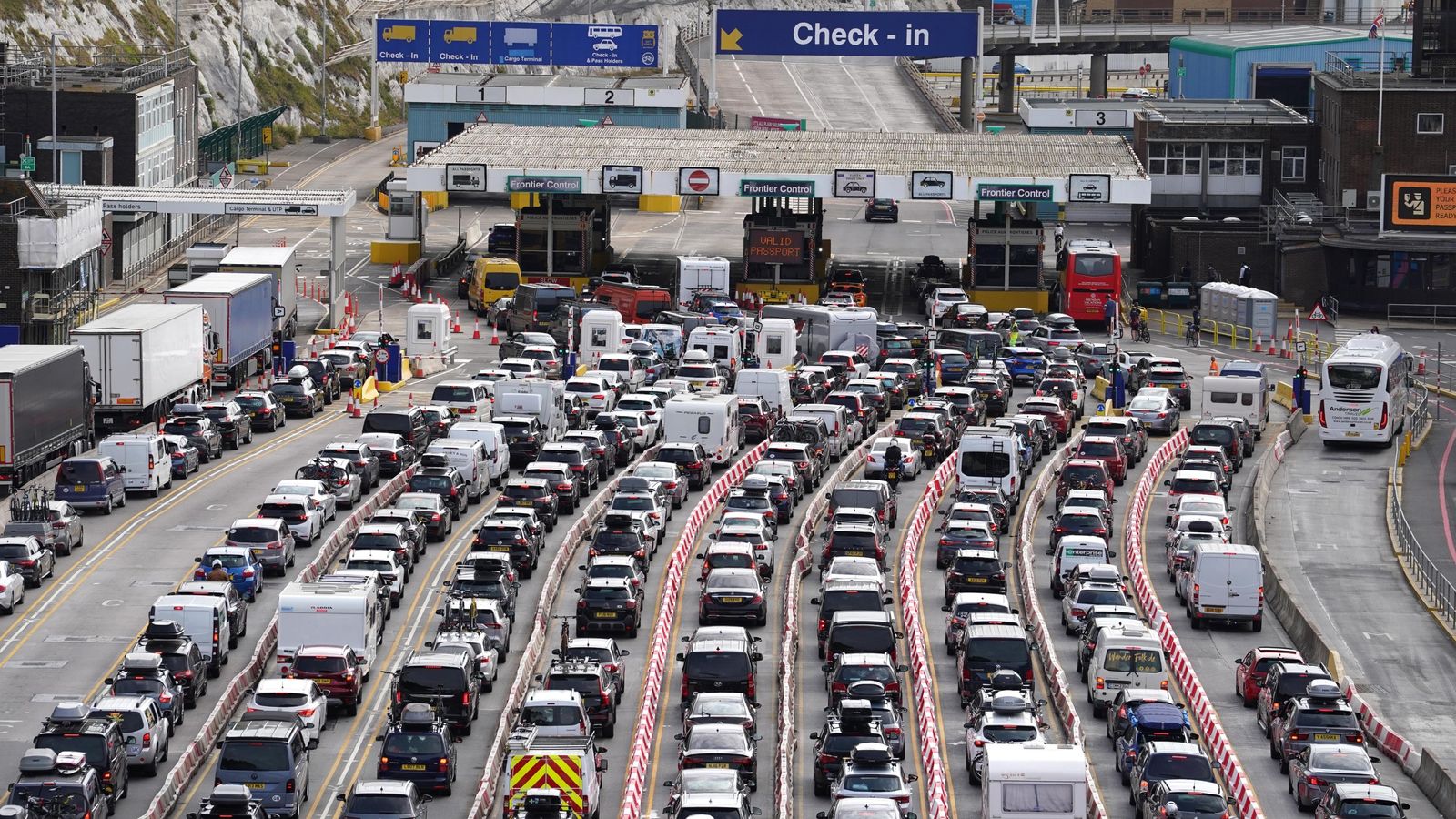 Britain’s travel chaos could get even worse today, with further delays expected at the Port Of Dover as the UK and France continue to argue over who is to blame for the gridlock.

Jack Cousens, head of roads policy for the AA, said: “As the schools closed their doors fully yesterday, Saturday could prove busier still this weekend.

“Drivers should continue to expect disruption and delays on major holiday routes to the southwest, eastern coast and ports of Dover and Folkestone.

“While many have decided to go at the start of the summer holidays, between now and the beginning of September when schools return, each Friday and Saturday will be busy on our roads.

“This is because these are the main switchover days for holiday lets.”

Airports and airlines have struggled for months with the return to normal summer demand following two years of coronavirus pandemic-related turbulence.

Thousands of flights have been delayed or cancelled, luggage has been lost, as the aviation sector tries to recruit, screen and train staff, having let many of their workers go during the worst of the pandemic.

On Friday the chaos expanded to include the Port Of Dover, with people waiting in six-hour queues to cross the Channel.

Roads to watch for delays over the weekend

Operator P&O Ferries said passengers should allow at least five hours to get through the security checks, adding that it expects Saturday to be “just as busy” as Friday was.

“We need action from France to build up capacity at the border to limit any further disruption for British tourists and to ensure this appalling situation is avoided in future,” she said.

“We will be working with the French authorities to find a solution.”

But French MP Pierre-Henri Dumont, who represents Calais, said the problems were “an aftermath of Brexit”, adding: “We have to run more checks that before”.

He also said that the Port Of Dover was too small and that there were too few kiosks for border staff due to the lack of space.

Read more:
Nine tips to reduce how much fuel you use
London Southend Airport offers to host flights being cancelled by bigger, struggling airports

The port’s chief executive Doug Bannister was unable to offer any promises that the backlog would clear in the coming days, but said officials were doing their best.

He said that being “let down by poor resourcing at the French border was “immensely frustrating”.

Passengers sailing across the Channel from Dover must pass through French border checks before they can board a ferry.

The port said it had increased the number of border control booths by 50%, but added: “Regrettably, the PAF (police aux frontieres) resource has been insufficient and has fallen far short of what is required to ensure a smooth first weekend of the peak summer getaway period.”

Grant Shapps said he was “working closely” with the French transport minister Clement Beaune, adding: “I welcome his commitment that both Britain and France will work closely to minimise further disruption so people can get away quickly.”