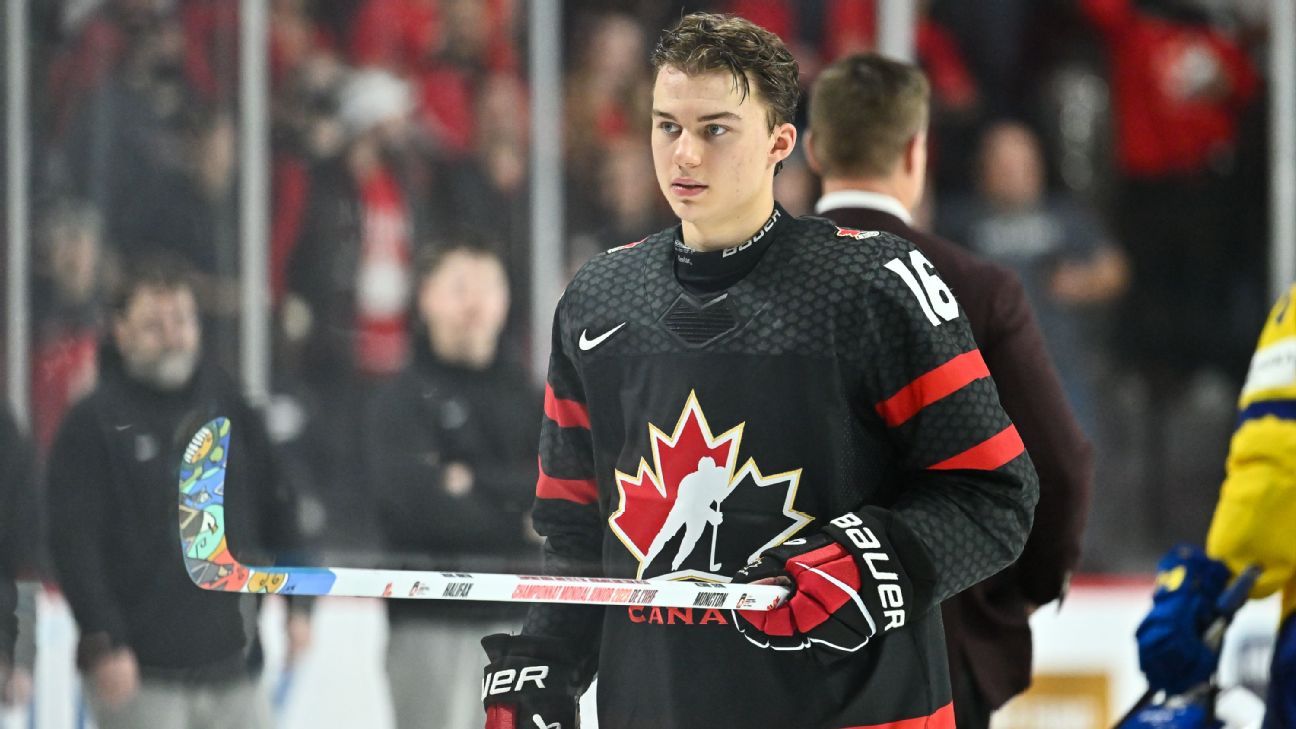 We’re five months away from the 2023 NHL draft in Nashville, Tennessee — one of the most anticipated drafts for NHL teams in recent history.

“We’ve been told about how exciting the 2005s (their birth year) are for a while now,” one NHL general manager told ESPN. “It’s why a lot of clubs are looking to hold on to their first-round picks this year. Sounds like you can even get first-round talent in the second round, too, and those picks may be stronger than first-round picks [in 2024].”

The 2023 draft class is highlighted by 17-year-old Connor Bedard, who cemented his spot as the likely No. 1 pick with a dominant World Junior Championship performance in Halifax, Nova Scotia, for gold-medal-winning Canada. “I honestly don’t know what else he would need to do at this point to convince any doubters,” one scout told ESPN. “Every time he jumped over the boards [at WJC], he was on the verge of doing something spectacular.”

After averaging 3.29 points per game at the tournament, Bedard took one day off. Then, in his first game back with the WHL’s Regina Pats, he registered 13 shots on net, scoring four goals and two assists, contributing on all six of his team’s goals.

Beyond Bedard, there’s plenty of talent from the No. 2 pick through the second round, especially among forwards.

“I spoke at the GM meetings in November and I told them, ‘This draft class is going to live up to the hype,'” the NHL’s VP of central scouting, Dan Marr, told ESPN. “But there’s a quicker end point than usual. There are 50-60 really good prospects. After that it does start to level off.”

Marr predicted a trend: More 19-year-olds will be selected in later rounds than usual, a byproduct of the pandemic skewing with player development timelines.

“The analytics component will play a stronger role in the second half of the draft, with some players without name recognition, perhaps players who have been passed over before,” Marr said. “Part of that is due to COVID, a lot of kids in the East missed a full year of development. So the ’04s and ’03s need an extra year to catch up, and 19-year-olds will float into the mix earlier than in years past.”

As for what else to keep an eye on? Marr and a few NHL evaluators shared their perspectives with ESPN for this midterm draft primer:

Marr called Bedard “one of the more natural scorers to come along since Patrick Kane.” His draft hype has reached the levels of Sidney Crosby in 2005 and Connor McDavid in 2015.

“The Connor Bedards don’t come around very often. And with Connor Bedard, the best is yet to come.” Marr said. “Let’s face it, he’s on a pedestal. At the start of the season, we had to meet with his agent, his team, and we had to set up a policy for NHL clubs if they wanted to interview him — just because of the demand, by them, by the fans, by the media.”

And with the spotlight shining brightest at the WJC, Bedard delivered.

“All the noise associated with being one of the top pick of the draft, he handled it well,” Marr said. “I think he’s very well grounded. Nobody will ever say he has a big head. I think he loves being on a team, he trains and plays that way. I’ve talked to different coaches and trainers over the years, and he’s someone who will learn from a mistake, and he won’t repeat it. It’s just his approach to it. He doesn’t do anything with fanfare. He doesn’t look for it, but it’s there.”

This season will include 103 exclusive regular-season games across ESPN, ESPN+, Hulu and ABC. More than 1,000 out-of-market games will be available to ESPN+ subscribers via NHL Power Play on ESPN+.
• How to watch
• Subscribe to ESPN+
• Stream the NHL on ESPN

The center is having one of the most dominant junior hockey seasons ever and then added to his resume in Halifax. He was described by one scout as being able to “drive play, create space, and get shots on net with the best of them.”

“One of the things that popped for me at this tournament was that his leadership abilities had been advanced,” Marr said. “He was able to step up and still be one of the best players and take on a leadership role, even being one of the youngest players.”

Bedard’s dominance is why so many NHL teams are racing to the bottom of the standings this year. Though the other lottery picks aren’t bad consolations.

The other top prospects

Adam Fantilli was the No. 2-ranked skater on the North American NHL Central Scouting’s midterm rankings and sits No. 2 on many teams’ draft boards. Fantilli burst onto the college hockey circuit this season as a freshman, dominating as a center for Michigan. Playing for Canada at the WJC, Fantilli shifted between a middle- and often bottom-six role — which revved up NHL evaluators.

“That excites me even more because it shows his versatility,” one NHL director of amateur scouting told ESPN. “He’s a left shot playing right wing — he’s never played there. He’s been a center his whole life, wherever he plays. And he adapted to that role well in order to help his team achieve their ultimate goal.”

Marr echoed that, saying at the tournament, “He was working hard and getting chances, that’s the most important part.”

“He’s on a mission this year,” Marr said. “He’s playing hard that way, and he’s getting results and standing out. That shows me how mentally tough he is. He caught a bug [at WJC], and he probably wasn’t 100 percent, it zapped him for sure. He’ll come back on the Michigan second half, and I think he’ll do something special.”

Swedish forward Leo Carlsson is the top-ranked European skater in the NHL Central Scouting midterm rankings. At 6-foot-3, 194 pounds, one scout gushed over Carlsson as having “elite net front presence.”

Get your favorite live sports, stories and originals with ESPN+, Disney+ and Hulu. Upgrade to a Disney Bundle plan and start streaming something for everyone today!

“Maybe he’s not as good of a skater as Fantilli, but he has great size and great hands,” the scout said. “He’s showed that he can hang in a pro league among men [in the Swedish Hockey League, Sweden’s top league].”

Marr said Carlsson ticked the necessary boxes in his performance in Halifax.

“It’s a 19-year-old tournament, so any 18-year-olds playing are the elite prospects,” Marr said. “So [Carlsson] gets the check mark just for making the team, getting ice time. The European model with player development is a little different, but it’s a successful approach, because when they come to the NHL and get a spot, they stay in the NHL. He’s on that path. He’s a solid prospect with a very high upside NHL potential.”

The Word Junior Championship did not include Russia, which has been banned by the IIHF following the country’s invasion of Ukraine. Russia’s top prospect is winger Matvei Michkov, who has been lauded as a potential top-three prospect over the past several years. There are fewer eyes on Michkov this season, as he plays in SKA Saint Petersburg of the Kontinental Hockey League, but evaluators still feel like they have a sense of the player after he competed in several well-attended tournaments over the past two years, including the Hlinka-Gretzky Cup and the 2021 world juniors in Texas.

How high Michkov will go depends on an organization’s willingness to stomach some risk, as he is signed to the KHL through the 2025-26 season and there could be complications for him to play in North America.

“He’s still in the conversation in the [picks] two-through-four range,” the NHL director of amateur scouting said. “But it’s going to take some investigation about his willingness to come [to the NHL] and when he wants to come. On the ice, though, there’s no question, he’s super skilled. A world-class talent.”

This will be a strong year for both the WHL (where Bedard plays) and the U.S. National Team Development Program. On the U.S. side, Will Smith — a Boston College commit — was deemed a “top-10 lock” by one scout. “He has a high skill level, and is especially crafty in tight areas,” the scout said. “But what I like about him most is that he can dictate the pace of play.”

The first defenseman taken off the board very well might be David Reinbacher of Austria. While it was tough to judge Reinbacher based on the WJC, considering Austria was not a very strong team, he still had strong moments — despite catching a bug later in the tournament that affected several players. And he’s put up a good body of work while playing in the competitive Swiss A League for EHC Kloten as an 18-year-old.

The first 32 players for the 2023 NHL All-Star Game have been announced. But it’s up to fans to determine which 12 players will join them on Feb. 3-4 in South Florida. Vote here before the deadline on Jan. 17.

“Reinbacher might be the top defenseman picked this year — he’s impressed me,” the NHL director of amateur scouting said. “He’s a 6-foot-3 right shot defenseman who carries the puck well. There’s not a lot of defensemen in this draft, and not a lot of big ones. So he stands out.”

It was a big WJC tournament for Czechia, which won silver. Their top prospect is Eduard Sale, a 6-foot-2 winger, projected for the top 10. An NHL scout gushed over Sale’s “hockey sense and vision, which create a lethal combination with his quickness and skill. He has all the tools to be an impact player.”

One of the biggest storylines of the 2022 NHL draft was the emergence of Slovak prospects, with Juraj Slafkovsky and Simon Nemec going Nos. 1 and No. 2, the highest-drafted players in their country’s history. It’s going to be another noteworthy year for Slovakia with forward Dalibor Dvorsky cementing his status as a first-round prospect. One director of amateur scouting projeced Dvorsky will go “in the Marco Kasper range” (Kasper was drafted No. 8 by the Red Wings in 2022).

“Dvorsky is an excellent player,” the director of amateur scouting said. “A two-way center who is super skilled. He won’t be a guy that leads the offense, but he’ll be a support guy for the offense. Coaches are going to love him — he’s always working and making smart, reliable plays.”

One of the buzziest players at the WJC tournament was Adam Gajan, a goalie who seemingly came out of nowhere. Gajan wasn’t even named to the initial Slovak training camp roster, and as the third-stringer, he didn’t dress for Slovakia’s first game. And then he tore it up, posting a .936 save percentage through four starts, including stopping 53 of 57 shots against Canada.

One NHL scout predicted Gajan will be one of the “most scouted players over the second half of the season. People want to see if he’s for real.”

Google is asking employees to test potential ChatGPT competitors, including a chatbot called ‘Apprentice Bard’
Driving for perfection: The thousands of miles that shaped Alycia Baumgardner into a world champion
‘Spy balloon’ spotted over Latin America is for ‘civilian usage’, China says
Weekend Project: I added a solar panel to my electric mini-truck to charge from the sun
PM was told of Raab’s ‘unacceptable behaviour’ before appointing him to cabinet, source says