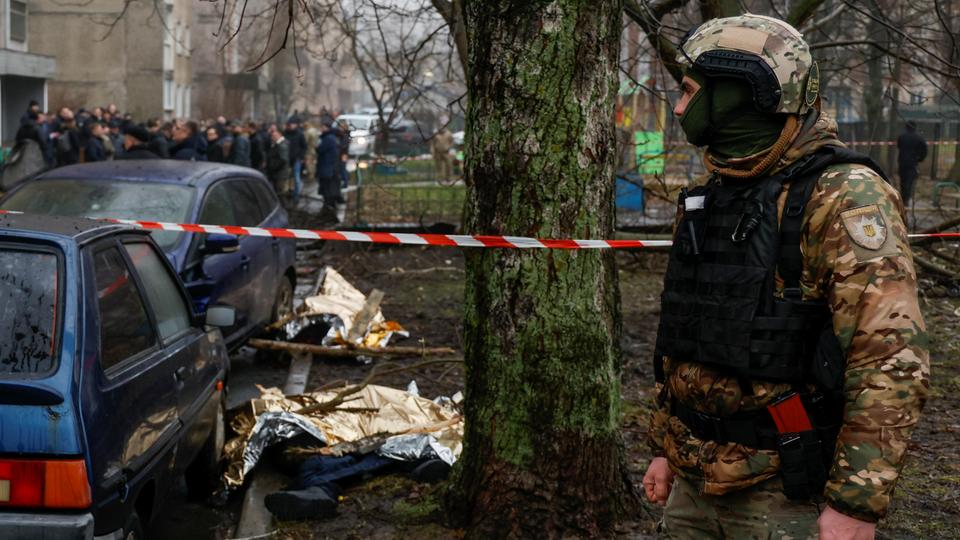 KYIV At least 16 people, including Ukraines minister of internal affairs, other pivotal figures in the wartime leadership and three children, were killed on Wednesday morning when a helicopter crashed near a nursery outside Kyiv in what President Volodymyr Zelensky called a terrible tragedy.

The helicopter came down close to a nursery and a 14-storey residential building in the town of Brovary to the north-east of the capital Kyiv.

Images posted from the scene showed smoke rising over the crash site and a long trail of fire that could be where fuel was spilled.

One photo appeared to show damage to the upper story of the nursery, and another showed the crumpled remains of the helicopter, some of the seats still visible.

Several dead bodies draped in foil blankets lay in a courtyard near the damaged nursery. Emergency workers were at the scene. Debris was scattered over a playground.

A witness at the scene told Suspilne, Ukraines national public broadcaster, that she saw the helicopter a French Super Puna on fire and spinning in a circle before it hit the ground.

Today, a terrible tragedy occurred in Brovary… The pain is unspeakable, said Mr Zelensky. We could hear screams

Mr Oleksiy Kuleba, the regional governor, said 18 people were killed. But the deputy head of the presidents office later announced a death toll of 16, and said 30 others were injured, including 12 children.

The State Emergency Service said on Wednesday afternoon that 17 people had been confirmed dead, including four children.

We saw wounded people. We saw children. There was a lot of fog here. Everything was strewn all around. We could hear screams. We ran towards them, Glib, 17, a resident of Brovary who gave only his first name, told Reuters.

We took the children and passed them over the fence, away from the nursery as it was on fire, especially the second floor, he said.

Mr Monastyrskyi would be the most senior Ukrainian official to die since the war began. Ukraines Interior Minister Denys Monastyrskyi (right) was appointed by President Volodymyr Zelenskiy in 2021. PHOTO: REUTERS He oversaw the countrys police, its national guard and border patrol units, including tens of thousands of combatants who have fought in the war.

It was not immediately clear what caused the helicopter to crash. The helicopter was flying towards frontline regions in eastern Ukraine.

The purpose of the helicopter flight was to carry out work in one of the hot spots of our country where hostilities are ongoing. The interior minister was heading there, the deputy head of the Ukrainian presidential office, Mr Kyrylo Tymoshenko, said on local television.

Kyivs Mayor Vital Klitschko said Mr Monastyrsky was flying to the scene of a Russian missile attack on the city of Dnipro on Saturday.

There was no immediate comment from Russia, whose troops invaded Ukraine last February, and Ukrainian officials made no reference to any Russian attack in the area at the time.

Separately, Ukraine reported intense fighting overnight in its east, where both sides have taken huge losses for little gain in intense trench warfare over the last two months.

Ukrainian forces repelled attacks in the eastern city of Bakhmut and the village of Klishchiivka just south of it, the Ukrainian military said.

Russia has focused on Bakhmut in recent weeks, claiming last week to have taken the mining town of Soledar on its northern outskirts.

After major Ukrainian gains in the second half of 2022, the frontlines have hardened over the last two months.

Kyiv says it hopes new Western weapons would allow it to resume an offensive to recapture land, especially heavy tanks that would give its troops mobility and protection to push through Russian lines.

Western allies will be gathering on Friday at a US air base in Germany to pledge more weapons for Ukraine. Attention is focused in particular on Germany, which has veto power over any decision to send its Leopard tanks, which are fielded by armies across Europe and widely seen as the most suitable for Ukraine.

Berlin says a decision on the tanks will be the first item on the agenda of Mr Boris Pistorius, its new defence minister.

Britain, which broke the Western taboo on sending main battle tanks over the weekend by promising a squadron of its Challengers, has called on Germany to approve the Leopards. Poland and Finland have already said they would be ready to send Leopards if Berlin allows it. REUTERS More On This Topic Ukraine demands speedier weapons deliveries from West to confront Russian pressure Henry Kissinger says Russia war validates Ukraine's Nato bid

Tech stocks just finished a five-week rally — the longest stretch since market peak in November 2021
2.3m households missed an essential payment in January, data reveals
Putin To Give A Million Rubles Each To All Women Who Give Birth To 10 Or More Children
Norwegian Expert’s Prediction ‘The Beginning Of The End’ For Vladimir Putin’s Regime
Saudi Aramco backs Brooklyn-based startup turning ammonia into fuel